The reason we are excited about this is that it allows us to predict (for the first time) when temporally changing magnetic fields will stimulate nerves in the human body.  Both MRI and MPI use time-varying magnetic fields, and as the systems have gotten stronger (higher gra­dient strengths), the occur­rence of nerve stim­ulation has become a limiting factor in what we can do with MRI. As an example, use of our MGH “Connect­ome” gradient sys­tem beyond slow diffusion encoding pulses is entirely limited by PNS. While per­ipheral nerve stimulations is not necessarily considered an adverse health effect, its annoying and a sign that painful stimulation is not far away. It starts as a slight tingling sensation like some­one is touching you with a feather but then becomes twitching, and if strong enough even painful. At higher levels still, cardiac arrhythmia and seizures are a concern. Currently, when MRI gradient systems are designed, we have some rules of thumb to try to minimize these effects, but we really don’t know how well the system will work until we try it. The manufactures purposefully tests the stimulation limits in healthy subjects and set the operating point just below this.

Thus, the current state-of-the-art does not allow any systematic optimization of the internal fields to minimize the nerve stimulation effect. Our goal is to provide a method to a priori predict a coil’s thresholds and thus allow this important barrier to be considered during design optimization. We used a realistic model (originally intended for digital anatomy lessons), and assigned electromagnetic properties to the tissues. We then compute the fields and currents generated by the switching fields expected in routine MRI operation. After that we use a modern mathematical model of how nerves respond to the induced electric fields to determine if the fields are strong enough to generate an action potential (“nerve firing”).  To do this we had to label every nerve segment in the model with a best guess of the nerve type and properties. Since it’s a numerical model, we can crank up the fields and see 1) which nerves fire first, and 2) what the threshold is.   This will allow us to compare design strategies numerically without actually building the devices (and without testing them in human subjects). We hope to be able to quickly test new ideas to reduce PNS limitations  and include this effect in numeric design optimizations. The goal will be better, faster MRI and MPI machines. 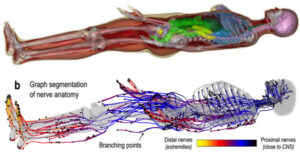 Body model originally provided by Zygote (American Fork UT USA) and was then remeshed and the tissues were assigned electrical properties.  The nerve segments were labeled with the nerve-model properties based their identified type and likely diameter.  The combined nerve, electrical properties model allows us to calculate the induced fields in a given gradient coil design, and determine the electric fields along the nerve.  Then a mammalian nerve model (McIntyre-Richardson-Grill 2002) allows us to simulate nerve dynamics and determine if an action potential is induced (nerve stimulation.)  Both the strength of the electric field and its orientation with respect to the nerve are important in this non-linear process.  Additionally, the heterogeneous model is important since the tissue conductive paths shape the electric fields (whereas they are only a minor perturbation on the magnetic fields.)